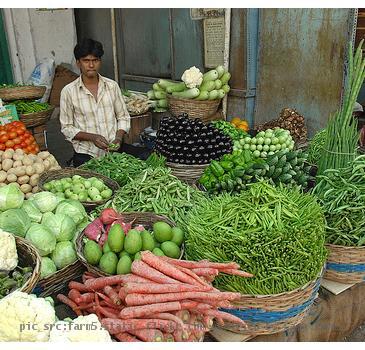 HYDERABAD, INDIA (GaeaTimes.com)- Worried over rising price, Andhra Pradesh CM N Kiran Kumar Reddy has instructed certain measures to be adopted during Sankranti. These measures are meant for bringing down the price of various commonly used vegetables including onion during the festive season. The CM has asked the civil supplies, marketing and agriculture departments of the state to procure essential commodities and vegetables and sell them at the rythu bazaars to curb the price escalation. The CM held a meeting with the officials and ministers of the concerned departments and tried to resolve issues like paddy procurement and subsidy distribution for farmers. The officials have been asked by the CM to offer vegetables at reduced rates in two packages.

The Sankranti special vegetable packs cost INR 99 and INR 49 per pack respectively. The consumers can avail the facilities at Hyderabad’s rythu bazaars. The other districts will also get the same facilities. The CM of the state asked the officials to ensure the onions are procured from wholesale market to sell them at rythu bazaars. The producers who are willing to sell vegetables to consumers at reasonable price would be given transport facilities said the state government. Even the farmers hailing from rural areas will get transport facility to take their produce to the cities.

Botsa Satyanarayana the state’s transport minister attended the meeting called by the CM and he was asked to get RTC buses during Sankranti so that the farmers do not face problems in transport. In the last few weeks the price of onion has skyrocketed in various parts of India and Andhra Pradesh is not an exception.

May 07, 2010 (Sampurn Wire): Nandamuri Balakrishna would play the hero in ‘Paramaveera Chakr...

NEW DELHI - Alumni of the Aligarh Muslim University (AMU) will set up a health camp April 12-14 for ...

AGARTALA - The very word 'festival' often reminds people of delicious food, as celebration of any fe...