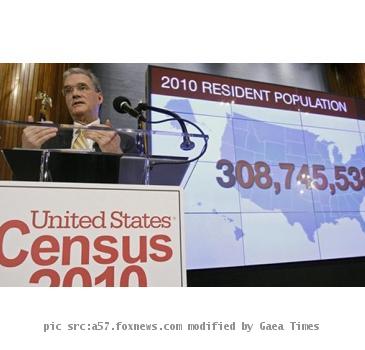 SAN FRANSISCO (GaeaTimes.com)- The Census Board of the United States of America, has declared the 2010 Census Results. These statistics have once again determined the current population trend of the nation. The overall result shows that United States have been through a population increase of only 9.7% as compared to 13.2% in 2000.

According to the 2010 Census Results, the state that has been through the maximum increase in population is Nevada, with an 35.1% positive population change. Followed by Nevada is Idaho, with a change of 21.1%. Texas follows next with 20.6%. These are the three states with the maximum growth of population. On the other hand, the states that has gone through a decrease in the population growth are Puerto Rico with -2.2%, Rhode Island, with 0.4%, Ohio with 1.6%, Louisiana with 1.4%. however, it seems that every state including Nevada, had a rapid decrease in the population growth than what was counted ten years back in the 2000 Census. The current population of the United States of America is 308.7 million. Over the last ten years the total population of immigrants is somewhat around 13 million, while the approximate number of illegal immigrants could be somewhat around 10 million. This has made people come to the conclusion that perhaps United States is no more the hottest melting pot in the world. The few states that gives home to the maximum number of immigrants are Florida, Texas, Arizona, Nevada and South Carolina.

Nevada,2010 Census Results says that the southern and the western nations of the state experienced the maximum increase in the population. However, the result also states that America is undergoing the slowest pace in population growth ever since the depression. With 281.4 million in 2000, it has increased to only 308.7 million (9.7%). While, in the last 2000 census, it was up by 13.2%, from a population of 248.7 million in 1990.

NEW DELHI - The Dalai Lama, the spiritual leader of six millions Tibetans and a global icon of peace...

LOS ANGELES (GaeaTimes.com) -- The eleventh season of "Dancing with the Stars" is on the verge t...

SEOUL - North Korea blamed South Korea for starting an exchange of artillery Tuesday across their bo...

BANGALORE - About 60 students from India, Pakistan, Sri Lanka and Nepal will contest in the finals o...

NEW DELHI - The following are the official figures of the budget outlay of Indian parliament for the...
Copyright© 2010 The Gaea Times