Missile Launch In California Is Still A Mystery 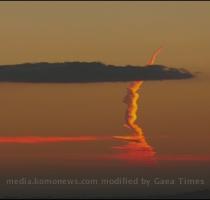 LOS ANGELES, (GaeaTimes.com)- No one is still sure about what it was yesterday up in the sky of Los Angeles. Some children fantasized it as an alien invasion, while their parents thought it to be foreign threat and were worried about the national security. Some people also thought that it was a missile launch in California. However, the high authorities said that none of the speculations were true, and finally, even they failed to figure out what it actually was.

The trail of the spectacular trail of vapor was found about 35 miles away from the coast of Los Angeles yesterday. Immediately after it was seen, it consumed all the media footage. However, none of them could say what it actually was. All the authorities who are in charge of missile defense, including Pentagon, FA and NORAD, could say what it actually was. However, the authorities in pentagon has also ruled out the apparent possibility of foreign threat and said that the national security is absolutely under control. So was the government carrying out a secret missile launch during the sunset? John Pike, director of Globalsecurity.org, a military policy research website said that this is a remote possibility as, if that was the case, then they would have conducted it during the night and not under the day light. Rocket launches are a common sight in California, but if that was the case then the military officials would have known about if a few weeks before. However, even they were clueless about the incident.

Many people made several speculations regarding the incident and named it at “Mystery Missile Launch” in California. It was cameraman Gil Leyvas of KCBS-TV Channel 2, who was captured the incident in his camera at 5:15 PM, while he was shooting the footage of sunset over the ocean.