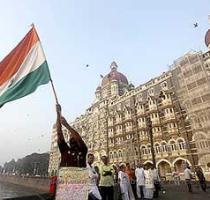 MUMBAI, INDIA (GaeaTimes.com)- It has been two years since India faced the most atrocious terrorist attacks of all time. This day of 26/11, would always remain infamous in the Indian history as it marked the failure and incompetency on the part of our government to provide the security to all those innocent boarders at the Taj Hotel, Mumbai and several valiant martyrs and police officers who lost their life in the process of combating terrorism. The day highlighted India’s vulnerability and boosted the confidence and atrocities of the extremist groups, who slapped our nation to molest its peace and integrity without much resistance.

Mumbai today, recalled this unfortunate day of 26/11 on its second anniversary and paid homage to those 166 people who lost their lives in the hands of the ten Pakistani terrorists. Maharashtra Chief Minister Prithviraj Chavan, Deputy Chief Minister Ajit Pawar, Home Minister RR Patil and some of the top police officials laid wreaths at the martyrs memorial at the South Mumbai Police head quarters. Force One, Quick Response Team and the Mumbai Police conducted a parade at the Marine Drive seafront, to show case their might and power, ad thereby assure the people safety and security from any further unfortunate mishap in the future. Magathane CNG Station in Borivalli East, will witness the homage ceremony by union Home Minister P. Chidambaram, union Petroleum Minister Murli Deora and Chief Minister Prithviraj Chavan in the evening. Many commemorative functions and campaigns have been organized all over the city today.

Prime Minister Manmohan, in New Delhi, took a pledge to redouble efforts and make security more stringent and punish the criminals for a better justice for the nation. He paid a tribute to all those fighters, who lost their lives in the barbaric 26/11 attack.