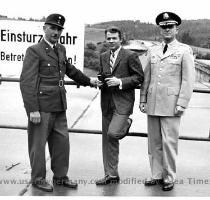 LOS ANGELES, (GaeaTimes.com)- Historical Veterans Plaza near Market Street and Newhall Avenue. observed the veteran’s Day yesterday, to a pay the tribute to all the American war heroes. While concluding the event, they paid an ode to two distinguished servicemen and Western actors, Jimmy Stewart and Audie Murphy.

Mayor Laurene Weste, McLean and Council member Laurie Ender uncovered Jimmy Stewart’s bronze saddle with the American air force emblem on it, while the area coordinator for the William S. Hart Boy Scout Council and Mark Murphy, a cousin of Audie Murphy, uncover his plaque, with the insignia of the U.S. Army on it. Audie Murphy has always been regarded as the most decorated soldier of the American Army. He was always noticed for his petite figure, with a height of 5 ft 5 inches, and a weight of only 110 pounds. He was initially rejected by the navy and the marines in 1941 for the same reason. However, the army recognized his worth and strength and he became a hero and a martyr for his country. He received the Medal of Honor and 32 other medals for his service to the country. However, unlike others life was not a smooth ride for Audie Murphy. He was born in a poor family in Texas, with eleven siblings. He was abandoned by his father at a very young age and his mother expired when he was just 16.

Audie Murphy had to give up his schooling and all other childhood aspiration in order to earn his living. Ploughing, picking cotton and hunting was what his childhood consisted of. When he went approached the army, they tried to transfer him to a cook and baker’s school, seeing his petite figure. He died in May 28, 1971, in a private plane crash, immortalizing his name in the US Army.