Vibrant Gujarat 2011 To Start This Month 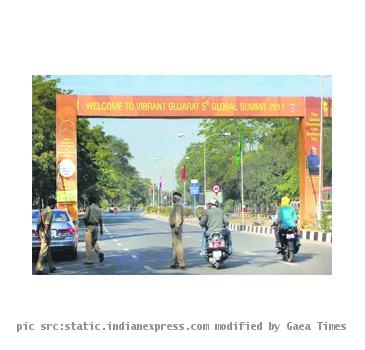 AHMEDABAD, INDIA (GaeaTimes.com)- The Vibrant Gujarat 2011 Summit is all set to kick start on January 12, in collaboration with delegates from all over the nation and the world. The summit would once again call for lucrative economic collaboration with mergers among several organizations, expertizing in different aspects of technological advancements.

According to the reports of Canadian High Commissioner Stewart Beck, the two nations will aim to increase its bilateral trade worth $15 billion in the next five years, through the Vibrant Gujarat 2011. It will accentuate the “natural synergies, and economies of scale” that the two nations wishes to share. The summit will also witness a few more lucrative deals. Reportedly, the Gujarat government and Universal Success Enterprises Limited (USE) will be signing the MoU as the state also wishes to expand its scope in ship building and thermal power. PK Modi, chief executive officer (Port and Power) of USE said that they are currently working on acquiring lands for several new thermal power projects and port development project. On the other hand, Bhagyesh Soneji, chairperson of Assocham Gujarat Council, said that they want to establish 25 specialized skill development centers, all over the state and they wish to start it by establishing a pilot project at Ahmadabad. They will sign the MoU with Federation of Italian Districts to facilitate intense training, designs, technological innovation and so on. Another MoU will be signed between the Academia-Industry Linkage Programme and the Gujarat Technological University, to boost the relation between industries and academic institutions.

Vibrant Gujarat 2011 will start welcoming the invitees with Gujarati folk music in the airport. More than 100 artists, belonging to below poverty line, hailing from all over the state would treat the guests with the melodious essence of Gujarati music, to project the rich cultural heritage of the stage.

ABU DHABI - Calling upon members of the Abu Dhabi Chamber of Commerce and Industry to develop joint ...

Gujarat to set up textile parks for cotton

AHMEDABAD - The Gujarat government is planning to set up separate industrial parks for spinning cott...

Now, you can buy Android Smartphones from Amazon on special promotion as little as a penny for a ne...

PUNE - Bollywood actress Raveena Tandon, who looked ravishing while sashaying down the ramp for desi...