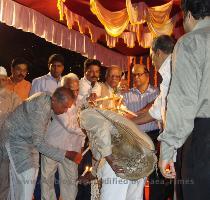 PANAJI, INDIA (GaeaTimes.com)- Goa is all set to celebrate the fiftieth anniversary of its liberation day. Fifty years ago, on the same day, the state became a part of India, with the help of the Indian army, who brought an end to the colonial rule of the Portuguese in the state.

Golden Jubilee celebrations of Goa Liberation Day was inaugurated on Sunday with ‘Mashal Procession’ from three different locations in the capital city Panaji. The procession to mark the glorious day in the history of the state was attended by thousands of people from all over Goa apart from a number of prominent dignitaries who graced the occasion and turned it into a huge success. The final inauguration was done by Chief Minister of Goa Shri. Digambar Kamat, who lit the lamp at the venue to mark the significance of the day. He was also accompanied by other ministers of the state, leaders from the opposition parties, freedom fighters, many celebrities of the state and thousands of other common people. The event also included distribution of awards to the people from different fields, who have contributed to the development of the state.

At the taluka level, the celebration of Goa Liberation Day was equally pompous, with flag hoisting in different localities. Governor, Dr. S.S. Sidhu will be hosting a reception at the Raj Bhavan in Dona-Paula at 5.15 p.m. Every department of the government bodies, celebrated the day, by organizing programs and cultural extravaganza. Local schools are colleges will remain busy all throughout the day with several cultural programs and flag hoisting within their campus.

PANAJI - Surendra Sirsat has been appointed the president of the Goa unit of the Nationalist Congres...

PANAJI - A woman who has tracked down and visually documented disappearing lakes in New Delhi's peri...

PANAJI - Lives have become so stressed and rushed that even clowns believe making grownups laugh is ...

KATHMANDU - Bollywood diva Manisha Koirala, who triggered a storm of gossip about an impending divor...

PANAJI - Two people were acquitted by a local court Monday in a case related to molestation of a nin...

Pakistani women will love me in 'West is West': Ila Arun

PANAJI - Pakistani women will love her in "West is West" because she represents them in the film, ac...

PANAJI - The 41st edition of the International Film Festival of India (IFFI) starting in Goa Monday ...

PANAJI - The 41st edition of the International Film Festival of India (IFFI), billed by organisers a...
Copyright© 2010 The Gaea Times