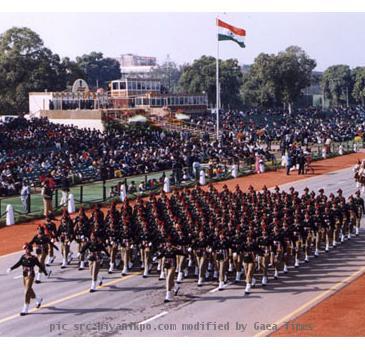 DELHI, INDIA (GaeaTimes.com)- The nation is gearing up to celebrate the 62nd Republic Day tomorrow and the security cover in the leading metros of India has been beefed up considerably. It is natural considering the extremist terrorist outfits target such occasions to hit out and they target the big cities including the capital of India. Kolkata is not usually within the prime targets but the city cops have not taken any chance and started beefing up the security at rail stations and airports. Jawed Shamim the Joint Commissioner of Kolkata Police said ‘In the city, security has been beefed up. All the 21 entry and exist points of the city will be kept under strict vigilance to prevent entry of the outsiders from Tuesday’. Even the hotels and guest houses will be put under scanner to ensure that no person without authentic identification documents can check in the city before Republic Day. Parking malls and shopping centers will also be put under scanner for this reason.

Kolkata is not the only city where security cover has been beefed up ahead of the Republic Day celebrations. The Delhi Airspace has been put under strict security vigilance. Along with Delhi Police over 15000 paramilitary personnel will ensure no untoward incident takes place in the national capital before or during the Republic Day.

Police Patrolling has been stepped up considerably and at key exit points barricades have been set up to monitor incoming traffic in the city. In Delhi special security arrangements are being made on the eve of Republic day as Susilo Bamgbang Yudhoyono, the Indonesian president will be coming.