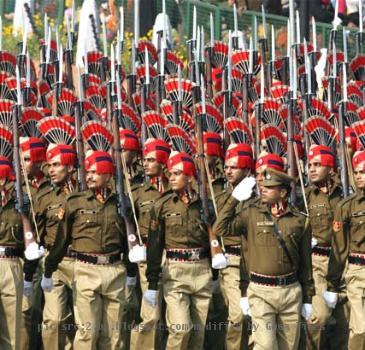 NEW DELHI, INDIA (GaeaTimes.com)- One of the distinct features of the Republic day celebrations in the country is marked by the R-Day parade that is held each year from Rajpath to Red Fort. Even this year, things are going to be no different as hundreds of artistes from all across the country are converging in the national capital to participate in the parade scheduled to be taking place on Wednesday morning. Apart from showcasing the culture and tradition of the country, the Republic Day parade 2011 would be displaying the country’s achievements in the field of defense technology.

The Republic Day 2011 celebrations in the national capital would be attended by Prime Minister Dr. Manmohan Singh, President Pratibha Patil as well as a host of other prominent political leaders and dignitaries. President of Indonesia Susilo Bambang Yudhoyono would be the Chief Guest at the gala event who would be accompanied by many delegates from the island nation. One of the major highlights of the R-day parade is going to be the Light Combat Aircraft (LCA) which would be on display and is going to be the prime theme of the tableau by the of Defence Research and Development Organisation (DRDO). Apart from these, another significant highlight of the event would be the Indo-Russian joint venture BrahMos cruise missile which is all set to be showcased at the parade.

At a news conference, Colonel AS Mahela told reporters that the Republic Day 2011 parade would kick off with three Param Vir Chakra awardees leading the contingents on Rajpath and would be closely followed by cavalry forces, mechanised columns as well as the rest of the contingents.