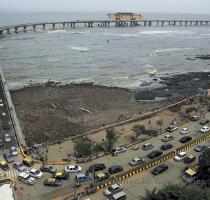 MUMBAI, INDIA (GaeaTimes.com)- US President Barack Obama’s visit to India on November 6 is expected to take a heavy toll on the commuters as well as the toll collecting agency for the Bandra-Worli Sea Link, MEPL. With reports surfacing recently that the sea link could be closed for some hours during the US President’s visit, it is evident that the authorities might not be pleased with the news. The Mumbai Entry Point Limited had paid the MSRDC (Maharashtra State Road Development Corporation) Rs.74 crore to get the tender for the toll collection after the construction of the sea link was completed last year. In spite of high expectations the MEPL has not been able to recover the amount after almost 16 months. Reports suggest that the closure of the sea link for some hours could cost the MEPL has much as Rs.2 lakh.

Yesterday two unidentified persons were seen strolling on the bridge where pedestrians are not allowed. Most onlookers have speculated that they could be checking the security of the Bandra-Worli Sea Link. A spokesperson for the MEPL said that they have not yet received any formal instruction or order has been given yet. He also added that in case they receive such an order, they will follow it.

The closing Bandra-Worli Sea Link will also cause heavy traffic on the Mahim Causeway and clog up the city a great deal. It is expected that the authorities will be taking adequate steps to keep the traffic situation under control on the big day of President Barack Obama’s visit.