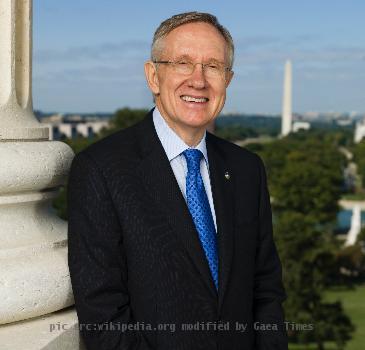 LAS VEGAS, (GaeaTimes.com)- In contrary to what was anticipated the Nevada Senate Race was won by Democrat Harry Reid. The leader who was slowly losing his popularity, just because of his affiliation to the Democratic Party, retained his seat by defeating the “Tea Party Favorite” Republican Challenger, Sharron Angle. The competition was quite cut throat and the results were uncertain till the midnight, until the final results were declared.

Many people did not like the victory of Democrat Harry Reid in the Nevada Senate Race, as they thought that he would not be able to do much about the growing unemployment in the state. But his campaigns were good, as he made every effort to come out of the Obama yoke and focused on his independent voice. On the other hand, his competitor, challenger Sharron Angle focused a lot on the issue of unemployment and accused Harry Reid for being shady and responsible for the growing unemployment. However, the Democrat supporters found her campaigns weird and baseless as they thought that this Republican can dismantle social security and force pregnant rape victims to keep the baby. Harry Reid called her “Wild” and “Extreme”. While Sharron Angle called her an illegal immigrant and an ally of child molester.

Within this campaign, Harry Reid’s campaign strategy prompted the voters to believe that it would be better to vote in favor of the experienced Democrat, rather than a feisty challenger, and made him a winner with a very small margin. The Nevada Senate Race witnessed 63% turnouts by the end of the polling. About 100,000 ballots were cast Tuesday in Las Vegas, while another 290,000 votes were received through mails.