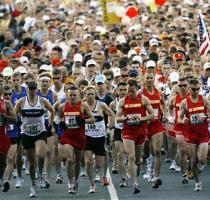 WASHINGTON (GaeaTimes.com)- The last three shootings at the National Museum of the Marine Corps in Triangle, The Pentagon complex in Arlington and the Marine Corps Recruiting Station in Chantilly, left peril amongst the people. The common factor amongst all the shooting was the US naval department. Therefore, with the Marine Corps Marathon, that is to be held on Sunday, the Pentagon authorities had no other options, but to enhance the security measures, so that the race can be conducted smoothly and safely.

The race which will begin at 8:00 AM on Sunday, is going to start from the south of Arlington Memorial Drive and end at Iwo Jima Memorial. Every year, more than 30,000 people participate in the Marine Corps Marathon, and this year the runners are not expected to be less. In the last three shootouts, no ordinary man was hurt or targeted. The FBI linked all the three mishaps and came to the conclusion that the gunman used the same weapon, which was a high powered rifle, to conduct the October 17 and October 19 shootout. On October 17, ten bullets were fired, between 12:15 a.m. and 5 a.m. Five of them had hit the windows, and the other five had hit the metal panels. On October 19, six bullets were targeted at the Pentagon, with four hitting the building’s facade and two hitting the windows. The bullets found, have been used as evidences, to take the investigation forward.

The FBI deduced that their only target is the naval department and has no problems with the masses. Therefore, they have assured that there is nothing to fear during the Marine Corps Marathon. However, they have decided to make the safety measures more stringent, along the route of the race.