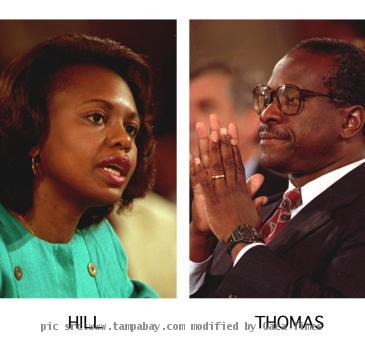 WASHINGTON (GaeaTimes.com)- Lillian McEwen, the former girlfriend of Justice Clarence Thomas in one of her recent interviews made a shocking statement when she said that she supports Anita Hill and her testimony. Lillian McEwen said in one of her interviews to a reputed media source that Clarence Thomas was obsessed with pornographic movies when they were in a relationship. Early this week Clarence Thomas’ wife Virginia Thomas send a voice message to Anita Hill asking her for an apology to her husband. However, Anita Hill called this voice mail “inappropriate” saying that she does not to intend to apologize and she stands by her testimony.

Lillian McEwen said that previously she did not speak about her career because he had to think about her career as well. However, after her retirement she feels that she has nothing to be afraid of. While speaking about Clarence Thomas she said that he was obsessed with “porns” and he used to watch women who worked with him to find out who could be his potential partner. She also said that Clarence Thomas used to speak about the pictures ands scenes from the pornographic magazines and videos that he used to watch.