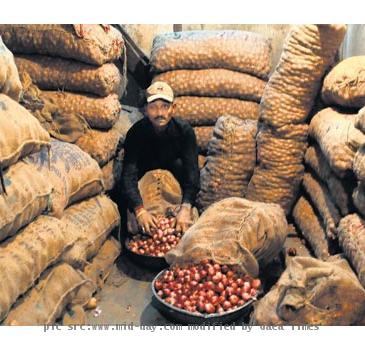 HYDERABAD, INDIA (GaeaTimes.com)- The hope of the common man that Makar Sankranti will bring a drop in the price of the widely used vegetables including onion is turning true. The residents of Hyderabad are already buying onion at reasonable rates and chances are there that within the next few days, the residents of other states will also be able to buy onion at lower rates. In Hyderabad, the government earlier introduced special vegetable packets at reasonable rates and now the citizens are breathing easy since onion is selling at approximately Rs 40 per kilo. In the supermarkets, it is being sold for Rs 50 a kilo and grade two onions are trading for even less. As a matter of fact, the price of onion shot up countrywide from the end of December 2010. A lot of people had to cut down on Sankranti menu and vegetable shopping owing to inflated price of onion and other vegetables.

The next few days of Makar Sankranti may witness a country wide drop in the price of onion for imported onions. Pakistan imposed a ban on importing onion by land route but the imports done by sea route is going to help things for the Indians. It has been reported that during the Sankranti weekend, over 800 tons of onions have reached Mumbai from Karachi through the shores. Since a section of this imported stock has been released, the price of onion in the wholesale market has already dropped.

Another stock of onion is expected to arrive from Pune after Makar Sankranti. The Agriculture Produce Marketing Committee officials have said that the imported onion is of good quality as well.

Gun battle breaks out between Maoists and Bihar police in Chapra

KATHMANDU - Almost two years after he was stripped of his crown and became a commoner, Nepal's depos...

GOSHAL VILLAGE - India is known for its diversity and a large number of people living in different r...

AGARTALA - The very word 'festival' often reminds people of delicious food, as celebration of any fe...
Copyright© 2011 The Gaea Times