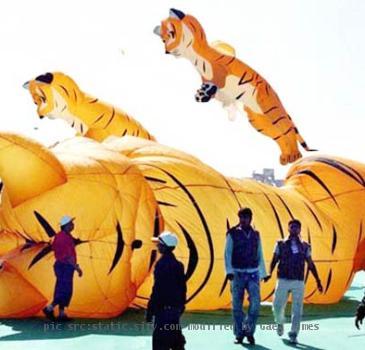 BELGAUM, INDIA (GaeaTimes.com)- During the festive occasion of Makar Sankranti, a number of places in India will witness kite flying festival but the one that is going to be held at Belgaum promises to be different from all others. The maiden kite festival of Karnataka will take place next week at Belgaum, a city adjacent to Goa. Various sized and shaped kites will adorn the sky, it is being expected. The organizers behind this festival are keen on promoting Belgaum as a budding tourism spot located strategically close to Goa and Vijayanagar dynasty of Yore. Abhay Patil, the legislator and organizer of the festival said “Kite flyers will fly kites at night as well, which is the first time such a thing is happening”. This will attract many people to the festival, the organizers believe.

The kite flying veterans who are taking part in the Kite Festival in Belgaum say that it is not actually child’s play as the general perception is. A lot of expensive kites will be used in the festival, it has been reported. In fact, some large kites may cost INR 10000 or more. The festival will be held on Jan 16th and 17th 2011. It is expected that close to 10000 enthusiasts will take part in it. The majority of the participants will come from Goa and Southern parts of Maharashtra. A lot of foreigners are also expected to attend the festival.

The kite festival organizers also said that 5 international and 15 national teams will join the festival. 30 international experts in kite flying have said they are likely to join it.

MUMBAI, INDIA (GaeaTimes.com)- It looks like Harry Potter can do better magic than Hrithik Rosha...

Life has been hectic since high school: Aishwarya Rai (Interview)

NEW DELHI - Aishwarya Rai says life has been extremely fast-paced since the day she chose to study s...

LONDON - One of the UK's leading kite surfers has become the world's first person to clear Brighton ...

NEW DELHI - After "Dhoom 2" and "Jodhaa Akbar", the sizzling pair of Aishwarya Rai Bachchan and Hrit...

MUMBAI - Anurag Basu had virtually gone missing after the debacle of "Kites". But the director has n...

MUMBAI - The country's business and movie capital is ready for a brush with contemporary literature ...

Remarks by the President at the University of Indonesia in Jakarta, Indonesia

I have become more disciplined in life, says Kangana

GURGAON - She started her Bollywood career at the age of 17, and over the period of four years, Boll...

NEW DELHI - With India set to become a non-permanent member of the UN Security Council with strong e...
Copyright© 2011 The Gaea Times