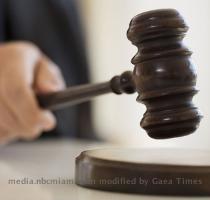 AVENTURA (GaeaTimes.com)- The owner of a dog named Christie Brinkley who seven months ago was charged of having sex with the dog has finally been set free from the legal hassles. Armand Pacher was accused by a University of Florida veterinarian of having sex with his Great Dane after he had made some unusual comments to the veterinarian about the animal’s health.

Trouble started surfacing for Armand Pacher in July 2010 when over the phone he talked to the veterinarian about his dog’s having sexual behavior. The prosecution accused the 65-year-old man of having molested his pet dog, bringing charges of animal cruelty case against him. Armand Pacher who is a retired insurance executive, had later on tried to defend himself by saying that he had made the comments in a light note and that he did not mean anything related to him having sex with his dog Christie Brinkley. He was accused of sexually abusing his dog after Dr. Melinda Merck, a forensic veterinarian said that tests revealed that there was the presence of human semen in the dog’s urine.

Armand Pacher’s defense lawyer Jeffrey Weiner, however, did not give up easily and hired six experts to investigate the case. Mr. Jeffrey Weiner said that the prosecution had no concrete evidence against his client and they were harassing him on the basis of insubstantial proof and false conclusions. After the six experts had successfully managed to prove the test results of Dr. Melinda Merck false, the court on Wednesday decided to end the case by setting Christie Brinkley’s owner free from the charges. Although the charges have been dropped against him, Armand Pacher claimed that his life has already been ruined by the dirty allegations.

LONDON - Playboy magazine is all set to auction off some of its most well known images featuring som...

Winston Churchill's last ever cigar to go under the hammer

LONDON - A cigar that once belonged to late British Prime Minister Winston Churchill is to be auctio...

NEW DELHI - Four percent of buyers at this week's auctions at Christie's, New York, were from Asia, ...

Tyra Banks to auction her dress for charity

LONDON - Talk show host Tyra Banks and a number of top models will be donating their dresses to char...

LONDON - One of the first computers assembled by Apple in 1976 which was sold by the company's found...

NEW YORK (GaeaTimes.com) -- Over a night an amazing trick played by the quarterback for Driscoll...