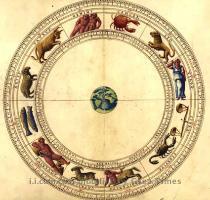 SAN FRANCISCO (GaeaTimes.com)- Rumors are abuzz that the already made predictions for the New Year are going to be altered soon! It is because the manner in which astrologers till now have been deciphering the celestial changes affecting the zodiac signs, is supposedly not the right one. A recent discovery by the Minnesota Planetarium Society about some changes of the planetary bodies is now hinting that the alignment of the stars on which astrologers based their predictions is wrong.

Astrologers since the time of the ancient Babylonians have based the predictions of every zodiac sign on the basis of when the sun was in at the time of the person’s birth. However, astronomers of the Minnesota Planetarium Society said that a lunar force has caused some changes on the Earth. It has been reported that the Moon’s gravitational pull on the Earth has resulted in the change of the Earth’s position in terms of its axis which has caused a shift in the alignment of the stars bringing a difference of about one month. Hence, all the earlier predictions of every zodiac signs is also likely to be affected due to the sudden change in the constellations.

Ever since, the concept of zodiac signs has been in existence, our zodiac signs have moved a month in accordance with the sun and stars. However, this time the major lunar impact is attributed to be the cause of the change in all the horoscope predictions! Parke Kunkle, an astrologer on being questioned about the recent zodiac change said that due to the changes in the position of the Earth, the sun is now at a different position which is likely to add some changes in the events.

Movie Review: 'The Social Network' is both epic and intimate in depicting Facebook's origin

Review: 'Social Network' epic and intimate at onceChecking into Facebook sporadically while writing ...

Pulsating with timeliness, 'The Social Network' paints a Web-connected generation, bit by bit

WASHINGTON - Over the next week, sky-watchers in the Northern Hemisphere will get a rare chance to...

Will WE ARE FAMILY get a step motherly treatment at the box office?

Starry, starry night at post-Emmys Governors Ball LOS ANGELES — After being on his ...

See below for clarification to a question (marked with an asterisk) posed in the briefing that requi...

NEW DELHI - Men, get over your fetish for belts, wallets and watches and discover the world of cuffl...

Actor MARK RUFFALO is distancing himself from the lead in a new biopic about DAVID KORESH, because h...