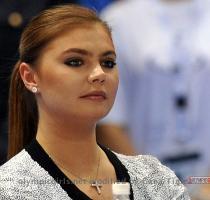 MOSCOW, RUSSIA(GaeaTimes.com)- In a sensational development Vladimir Putin the Prime minister of Russia has reportedly split ways with his wife Ludmilla and he is all set to get married to Alina Kabaeva, a pretty 24-year-old gymnast. The news has surfaced and a Moscow based newspaper has reported that the split with his wife came weeks ago. A Russian site has gone one step further and has claimed that the duo has been seen kissing each other in a restaurant In Moscow in recent times.

The gymnast Alina Kabaeva is a talented dancer and athlete who has been in the good book of the Prime minister of Russia for quite some time. That explains why she was made an MP at such a young age in Russia’s lower parliament. There is no doubt that she is a talented athlete. She bagged the gold medal in 1998 in the European Championships. The next year she added another feather in her crown and got the coveted World title. She grabbed the attention of Vladimir Putin way back in 2000, say sources close to her.

It is not known whether the gymnast is really tying the knot with the PM of Russia. Some tabloids have made this claim and they are of the view that the PM kept his divorce with his wife a secret and hushed up affair. The family of Alina Kabaeva has not confirmed or denied the news. Her father said vaguely that he is not aware about any such news but also added that he will not object if his daughter takes such a step.