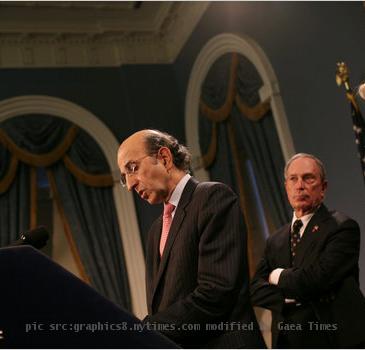 NEW YORK (GaeaTimes.com)- New York City Department of Education Chancellor Joel Klein resigned yesterday after eight years of service. Mayor Michael Bloomberg announced the news to the media. Joel Klein served his post since 2002 and he was the longest serving education chancellor who oversaw 1,600 schools with 1.1 million students, $21 billion operating budget and 136,000 employees in his career.

Mayor Michael Bloomberg announced in the press conference that Joel Klein has been a “tireless” champion for children and he was a “fearless proponent” for reform. The Mayor said that the former chancellor implemented “innovative” changes in the education system and he made massive difference in the lives of “millions” of children. Joel Klein, in his statement said that he would take the post of executive vice president at News Corporation. In the press conference he said that for more than eight years he had the privilege to wake up every morning and “knowing” that he had the opportunity to serve New York City and the school system he loved from his heart.

The officials of New York City Department reported Joel Klein will be replaced by Cathie Black who would leave her position as a chairperson of Hearst Magazine. Cathie Black is going to be the first woman to serve the position of chancellor in New York City. Hearst Corporation Vice Chairman and CEO Frank A. Bennack, Jr. said that there is no high priority in United States of America than its education system and willingness to climb up the ladder of improvement. Mayor Michael Bloomberg said that Cathie Black is expected to take her position from 2011 and Joel Klein will help her to understand her role as a chancellor.