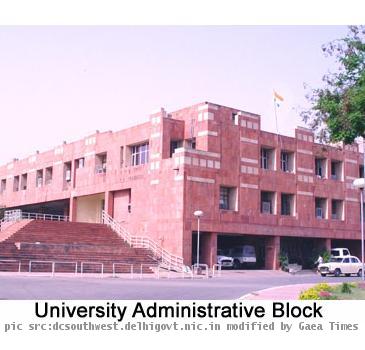 DELHI, INDIA (GaeaTimes.com)- The pornographic MMS clip involving two students of the prestigious Institution Jawaharlal Nehru University aka JNU has sent shock waves in the Delhites and education circles. The university which is home to thousands of students from India and abroad and prides itself for the liberal atmosphere is going to have a tough time ahead. The security office got hold of the video which shows two students belonging to separate departments of the university in seriously compromising position and the probe started. One of the students involved in the scandal is now facing probe but the girl student featured in the clip is no longer in the university. The students and teachers community of JNU are still to react to the shock and initial reactions say that the incident points to the corrosion of values in the coveted university.

The JNU administration has made it clear that those responsible for the shooting of the MMS would not be spared from punishment. V K Jain - the dean of students welfare said on this issue, “If found guilty by the proctoral team investigating the matter, the guilty students will be given exemplary punishment”. The female student who is in the clip was studying Arabic in the university the investigation has revealed. The boy reportedly is a Korean Language student.

Even though JNU authorities have not approached cops on the MMS scandal yet Vasant Kunj police is aware of the development. Reports of the girl going back after being called by her parents have also surfaced. The police is observing what action the university authorities take on this.

Lakhimpur-KHERI - An eager bunch of devotees await 'English Devi' in many towns and hamlets of India...

NEW DELHI - As Delhi dresses up for the Commonwealth Games and covers up its warts, the ubiquitous s...

NEW DELHI - A group of students Sunday staged a demonstration at the capital's Jantar Mantar protest...

Delhi students clean up Yamuna ahead of CWG

NEW DELHI - What the government could not, civil society is stepping in to do. Students in Delhi are...

Kashmir not the reason for Pak terrorism: Experts

New Delhi, July 23 (ANI): Scholars from the United States and India have said that it is a mispe...

NEW DELHI - A 13-year-old girl drowned in the swimming pool of the old campus of the Jawaharlal Nehr...

A discovery of India, with suggestions on Facebook (IANS Travel)

NEW DELHI - They have taken a break from their routine lives and embarked on a journey to discover t...
Copyright© 2011 The Gaea Times