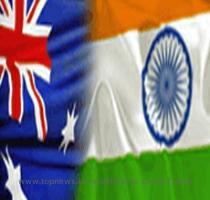 MELBOURNE, AUSTRALIA (GaeaTimes.com)- Four Australian police officers and 15 others have found themselves in a soup after circulating emails that poked fun at the death of an Indian by electrocution. Considering the sensitive situation of the racial problem in Australia presently, the emails have that circulated landed the cops in deep trouble with the law. In the emails, the cop made fun of the death of the Indian on a train by electrocution and it also joked that it could be the solution to the problem of Indian students in Australia.

The India Australia racism controversy continues to create ripples across the world as reports of such crimes emerge on the web. The emails were probed by the Ethical Standards Department’s Operation Barrot which concluded that it contained pornographic, racist, homophobic and violent material that could have an adverse impact. The state’s chief commissioner has condemned the action and described the emails as disturbing offensive and gross. He also said that the emails were contrary to the values of the state and the department. The Indian who was electrocuted to death was, reportedly, sitting on the roof of the train.

Reports suggest that some top police officers have also been netted in the scandal involving the email. The email that joked about the electrocution of the Indian caused the sacking of 4 officers, demotion of one and a whopping fine as well as placement on good behavior bonds for 5 others. The emails that circulated also contained footage of the video where the man was seen dying on the roof of the train.