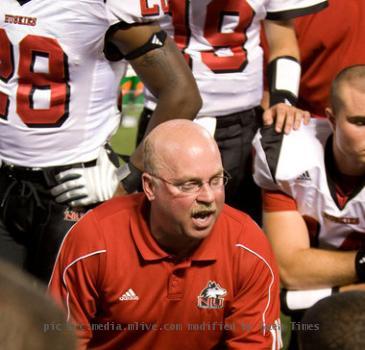 MINNEAPOLIS (GaeaTimes.com)- It seems that University of Minnesota’s search to find a perfect coach for the team has come to an end. A reputed media source reported that Northern Illinois’ Jerry Kill is expected to be announced as the replacement of its former coach Tim Brewster at a press conference on Monday. On the other hand, University of Minnesota’s athletic director Joel Maturi also announced the news to the media.

On October, the team’s previous coach Tim Brewster was fired from his post. The University officials fired him because the team was not performing well and the officials thought that the former coach’s move had failed badly. Tim Brewster left the university with a record of 15-30 in four seasons. However, Jerry Kill’s Northern Illinois Huskies defeated Minnesota Golden Gophers 34-23 back in September and the coach was praised for his effort. Jerry Kill has a record of 127-73 in his 16 years of career as a head coach. Former TCU, Alabama, and Texas A&M coach Dennis Franchione was his coach when he used to play as a linebacker at Southwestern College in Kansas.

Joel Maturi previously said that he is looking for another “Tubby Smith” for his team. However, a reputed online information portal has already announced that the university has hired Jerry Kill as the new coach of the team. Jerry Kill was diagnosed with kidney cancer back in 2005 and after that he was again hospitalized this year for a dehydration following his gall bladder issues. The university officials have not yet announced anything about the contract details. A source close to University of Minnesota told a reputed media source that Tim Brewster used to earn $1 million annually.

Melting glacial ice sheets 'may not raise sea levels after all'

LONDON - Glaciologists have been worried sick that the West Antarctic ice sheet will collapse ove...

NEW YORK - American fashion designer Tom Ford has chosen to pose with a 15-year-old model on the c...

WASHINGTON - Elderly people who take brain training sessions avoid the risk of car collision by half...

WASHINGTON - A new study has suggested that a protein superstructure-amyloid beta-is responsible for...

IRVING, (GaeaTimes,com)- Ever since Dallas Cowboy had a humiliating defeat to the Green Bay Pa...

LOUISVILLE (GaeaTimes.com)- It was a bad day for the most competent horse in Breeders Cup 2010...

OAKLAND (GaeaTimes.com)- Democrat candidate Jerry Brown salvaged some pride for his party in the...

WASHINGTON - Two years after his triumphal election as the first black leader of the US, President B...

LONDON - The iconic Aston Martin, driven by Sean Connery in two James Bond films, has been sold for ...
Copyright© 2010 The Gaea Times