King Arthur To Be Popularized Through An Auction 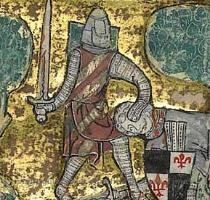 LONDON, (GaeaTimes.com)- No one can deny the pride that is involved in possessing antique things of historical significance. Next month one lucky person will be able to own one of the rarest manuscripts of the 14 th century. It is an exclusive 14 th century book, that contains all the tales of King Arthur’s legendary court in one manuscript adorned with hand printed pictures and illustrations, will be auctioned on December 7.

This master-piece written sometime between 1315-1323, is known as the “Rochefoucauld Grail”. The main significance of this book is that, it was written on animal hide and is one of the world’s earliest surviving accounts on the life of King Arthur. Unlike other old manuscripts, which are found in snippets and poor condition, this one still looks as attractive as before. Timothy Bolton, an expert in Medieval manuscripts, will be in charge of this auction, which will take place at Sotheby’s in London. This action is expected to yield 2 million pounds or $3.23 million. The manuscript will familiarize us with certain known and unknown details about the life of King Arthur, involving characters like the Holy Grail, Sir Lancelot, Queen Guinevere and Wizard Merlin. The history of the book started when it was created for Guy VII, Baron De Rochefoucauld, a French Aristrocrat. Then it went into the hands of the 19th century collector, Sir Thomas Phillipps. Later on, it was passed on to two other people.

Trimothy Bolton says that we all know certain things about the fabled and legendary King Arthur through the folklores and stories that have been trans generational in nature since the 14th century. However, this would be the first time that a documented version of these stories would be available through three volumes and more than a hundred bright pictures, that depicts themes like love, lust, treachery and deceit, friendship and honor of the medieval era.