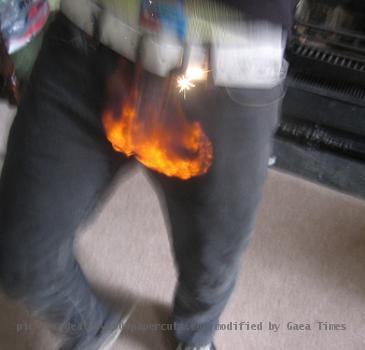 FORT LAUDERDALE (GaeaTimes.com) — Dixon Newbold was arrested after being reported to allegedly set her boyfriend’s crotch on fire with a lighter.

The guy identified as Sheldon Gonzales said he was “awakened by a burning sensation in the crotch area of his pants”. Reportedly, the bottom of his shirt atop his crotch was set ablaze by his girlfriend who was standing on top of him when he woke up, feeling the heat. What a heat? Heat of Passion, I suppose. The lady named Dixon Newbold didn’t even help him to extinguish the fire and Sheldon had to help himself, he used his hands and finally got out of the situation somehow.

GUANGZHOU - India assured themselves of at least two bronze medals in squash as their men and women ...

PATNA - With the counting of votes for 243 Bihar Assembly seats scheduled for tomorrow, Chief ...

WASHINGTON - A new study has suggested that targeted breast ultrasound should be the primary imaging...

More than 50pc of depressed patients give up their treatment

WASHINGTON - With the number of depression cases going up every year, a study has underlined that mo...
Copyright© 2010 The Gaea Times