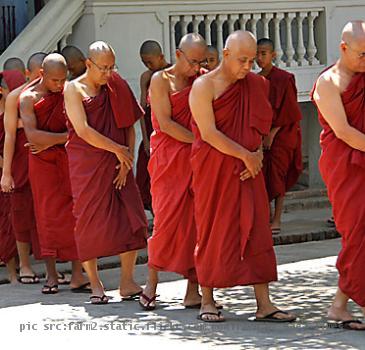 AGARTALA - Hundreds of Buddhist devotees thronged the Venuban Bihar monastery to participate in the 33rd ‘Kathin Chibor Dan’ festival here over the weekend.

The literal meaning of Kathin Chibor Dan is ‘Offering of a Monk Robe’ which is an annual religious festival during which Buddhist devotees donate different items for the living of the monks.

“The robe that our Buddhist monks wear is known as ‘Chibor’. Donating these robes is considered as the biggest donation and every year this festival is acknowledged,” said Ranjana Barua, a devotee.

Buddhists hope to attain peace, progress and prosperity of the nation and the entire mankind.

“Buddhism starts with peace and non-violence and so we believe through this there will be world peace and people will be kind to each other,” said Akshayananda, head monk of Venuban Bihar Monastery.

Some of the other devotees tie offerings like books, pens, notes, and thread onto a ‘Kalpataru’ (wishing tree) with strings which is considered auspicious and pray for their wishes to be fulfilled.

The festival is held on any convenient date within one month of the conclusion of the Prabarana Purnima.

Special prayer sessions are kept in the afternoon and later in the evening devotees lighten the candles for bringing the light in their lives. By Pinaki Das (ANI)