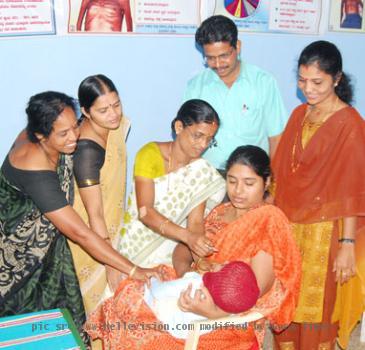 PATNA, INDIA (GaeaTimes.com)- As India takes up the renewed effort to eradicate the disease of polio from the nation, the state of Bihar would not be far behind as it initiated a five-day Pulse Polio Programme on Sunday to vaccinate the children below the age of five in the state. In spite of the unrelenting undertakings of the state government to get rid of the crippling disease as soon as possible, Bihar stills faces the threat from polio as many new cases of the disease have been detected in the state over the past few years. The five-day immunization programme that would kick off on Sunday would continue with its aim to vaccinate as many number of children as possible till Thursday. However, on January 26, Republic Day, the campaign would remain terminated, government officials have confirmed.

Health Minister Ashwini Kumar Choubey has emphasized that the Pulse Polio campaign 2011 is indeed significant for the Bihar government as it aims to completely eradicate the disease by next year. While revealing details about the government’s initiative for polio eradication, Ram Ratan Singh, the state government officer for immunization stated that since September last year, any new case of polio has not been reported from Bihar. The officer further divulged that in order to control the spread of the polio virus, vaccines have been provided to as many as 38 different districts of the state while teams of experienced doctors and medical staffs has been created to tackle the situation.

The Pulse Polio Programme 2011 would concentrate on the districts considered to be the high-risk zones which includes Begusarai, Darbhanga, Khagaria, Saharsa, Madhepura, Muzaffarpur, among others.

WASHINGTON - Astronomers at ASTRON demonstrated the feasibility of a new receiver technology by simu...

40 children down with fever after taking polio drops in Aurangabad

AURANGABAD - Around 40 children caught fever after they were administered anti-polio drops in Phulba...

New way to track tigers in the wild to ensure survival

WASHINGTON - Indian experts have discovered that it is possible to accurately predict the number o...

New prosthetic device offers to hope to the visually impaired

LONDON - Scientists have offered new hope to millions of people who have lost their sight th...

LONDON - Scientists have developed a new kind of underwater sonar that can detect objects like reefs...

LONDON - Lady Gaga has taken her eccentric style to a whole new level. She recently performed in Pra...

WASHINGTON - A team of US scientists believe laser treatment could make eye operations more safer an...

WASHINGTON - Inspired by the sonar capabilities of dolphins, scientists have developed a new underw...
Copyright© 2011 The Gaea Times