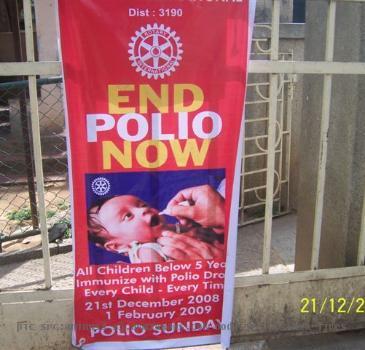 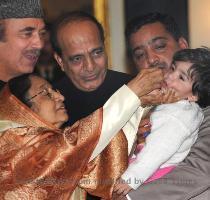 NEW DELHI, INDIA (GaeaTimes.com)- The Pulse Polio Programme 2011 kicked off in states across the country on Sunday in bid to vaccinate an estimated 174 million children below the age of five years. The campaign was inaugurated with President Pratibha Devisingh Patil administering the vaccine to around seven children at Rashtrapati Bhawan yesterday. From today, states across India would be taking up the effort to ensure that maximum number of children receive the polio vaccine with the aim of eradicating the disease completely. According to officials, an estimated 2,155 booths would be set up in various parts of the country in the five-day pulse polio campaign with as many as 541 supervisors being assigned with the duty to ensure that the programme takes place without any kind of glitches.

While talking to reporters about the Pulse Polio 2011 campaign, Union Health Minister Ghulam Nabi Azad said that the dream of a ‘Polio Free India’ is goal that can now be achieved as over the period of last six months, the number of children being affected with the crippling disease has dipped to a significant extent. As per the official statistics, last year, around 42 cases of polio have come to light which is considerably low in comparison to the 741 polio cases that were reported in 2009. At the same time, the total number of districts affected by the disease has dropped from 56 in 2009 to 17 last year.

WASHINGTON - Astronomers at ASTRON demonstrated the feasibility of a new receiver technology by simu...

40 children down with fever after taking polio drops in Aurangabad

AURANGABAD - Around 40 children caught fever after they were administered anti-polio drops in Phulba...

New way to track tigers in the wild to ensure survival

WASHINGTON - Indian experts have discovered that it is possible to accurately predict the number o...

New prosthetic device offers to hope to the visually impaired

LONDON - Scientists have offered new hope to millions of people who have lost their sight th...

LONDON - Scientists have developed a new kind of underwater sonar that can detect objects like reefs...

LONDON - Lady Gaga has taken her eccentric style to a whole new level. She recently performed in Pra...

WASHINGTON - A team of US scientists believe laser treatment could make eye operations more safer an...

WASHINGTON - Inspired by the sonar capabilities of dolphins, scientists have developed a new underw...
Copyright© 2011 The Gaea Times