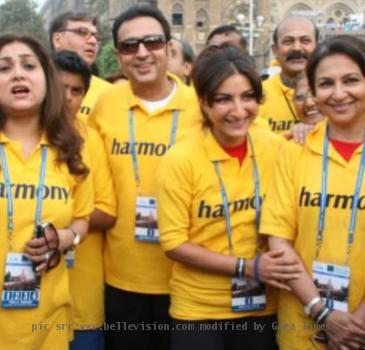 BEVERLY HILLS (GaeaTimes.com)- Mumbai is not only the business capital but also the entertainment capital of India. Every high profile event in the city, cannot be executed without the presence of the stars, and so was the Mumbai Marathon 2011. Amongst the Bollywood celebrities who participated in the event were the hunky John Abraham, hot and sultry Deepika Padukone, Vivek Oberoi (Sorry no adjectives), the deep dimpled Gul Panag and super toned Shilpa Shetty amongst many others. While singers like Shaan Mukherjee also put on his sports shoes to run the most awaited marathon of India.

John Abraham has been associated with this race for the last five years. He said that he has an image of a person who leads a healthy life. He finds it to be very encouraging that his image inspires many youth to remain healthy. Deepika Padukone, being a very sporty lady herself, could not retrain from witnessing the Mumbai Marathon 2011. She was surrounded by a number of body guards, as she cheered her new beau, and beer baron’s son Siddharth Mallya, who participated for the dream run. Shilpa Shetty on the other hand cheered the senior citizens in the race and said that, she is awestruck by the spirit of the elderlies and her enthusiasm is not even half as theirs. Gul Panag ran for 21 km. However, she was not in her full energy yesterday. She attributed her slow pace to the hectic life she has been leading in the last few months, which included, three marathons in three months and promotion of her film “Turning Thirty”.

When movies fail to feature an actor in the news, working for a cause definitely does and Vivek Oberoi thankfully understood that for his own good. He and his wife, Priyanka Oberoi, ran for the Cancer Patients Aid Association, and now finally he is in the news! Similarly, Rahul Bose ran for the Andaman and Nicobar islands benefit in the Mumbai Marathon 2011.

MUMBAI - With a view to bringing police services virtually to the doorstep of citizens, a Mumbai leg...

'Due diligence must before investing in global property markets'

NEW DELHI - The Indian sailing team, which won a silver medal in the match racing event at the ong...

MUMBAI - Builders in Maharashtra Tuesday asked the state government to remove discrepancies in the D...

'Kasab appears resigned to his fate'