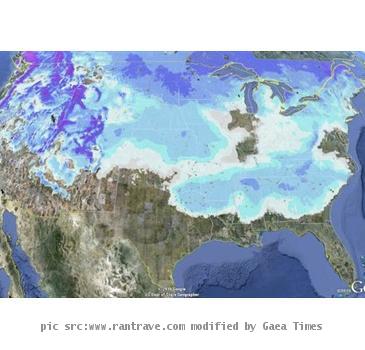 James Peronto, the public affairs officer of the National Weather Service reported that it was it was not typical to have that kind of a weather. To have snow in the states of the Rockies Mountain or in the Northeastern states is quite natural. However, it was surprising that even the southern states recorded snow this season. This season, the NWS recorded that the top of the dormant volcano, Mauna Kea in Hawaii, was covered with 7 inches snow. James Peronto said that such a weather condition does not really bring snow to the southern states. It requires for a particular type of weather to bring snowfall to those states. David Robinson, the state climatologist of New Jersey and a professor at Rutgers University said that the eastern states do get snowfall during this time because of the air currents over the Pacific Ocean. It became almost difficult for the National Weather Service to believe that there had been snow in 49 out of 50 states in the country.

SEATTLE (GaeaTimes.com)- The heavy snowfall in Seattle is taking a toll on the regular life of the p...

SEATTLE (GaeaTimes.com)- The Washington State Department of Transportation has been thrown into a si...

SEATTLE (GaeaTimes.com)- Monday's heavy snowfall has hit the traffic of Seattle severely. The ...

SHIMLA - The higher reaches of Himachal Pradesh may experience more spells of snow, the weather offi...

WASHINGTON - Images captured by NASA's spacecraft after the recent encounter with Comet Hartley 2 re...

Indians want upgrade on trade with China on Silk Route

NATHU LA - Indian traders have urged the government to review the list of items tradable with China ...
Copyright© 2011 The Gaea Times