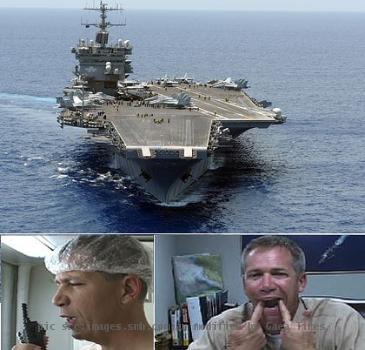 The media portals reported that those videos were shown to the 6,000 crew members in 2006 and 2007 and at that time Owen Honors was number two officer of the ship. In the introduction of the video, the former commander of the aircraft USS Enterprise is heard saying that video that he is going to show would offend many people on the ship. The Navy officials said that those videos were not meant to offend anyone. However, they also said that they are investigating about the whole matter. The Navy released a statement stating that the videos were intended to be “humorous skits” to get the crew’s attention on certain issues.

In the statement, it was also stated that U.S. Fleet Forces has launched an investigation surrounding the production of such videos and these kinds of videos were not acceptable at that time and it is not acceptable now a days as well. The Navy officials said that Navy does not “condone” or “endorse” these kinds of videos. In the USS Enterprise’s videos, Owen Honors jokes about the fact that his senior officers were unaware of the content of the video.

MEXICO (GaeaTimes.com)- The carnival Splendor which was hit by an engine room fire on Monday mor...

LOS ANGELES (GaeaTimes.com) -- More than 4,500 people on board Carnival Splendor are stranded wi...

US sends drones to hunt for Al Qaeda in Yemen

WASHINGTON - The US has deployed drones to hunt down Al Qaeda militants in Yemen for the first time ...

NEW YORK - A team of divers claimed to have found a cache of roughly 1,500 live ammunition scattered...