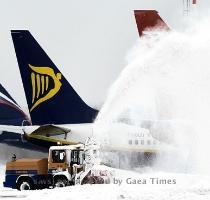 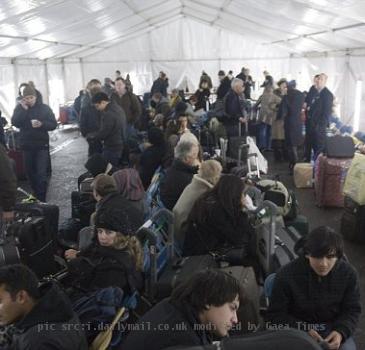 LONDON, UNITED KINGDOM (GaeaTimes.com)- Heavy snow and bad weather in Europe has led to the cancellation of hundreds of flight services in British Airways. BAA chief executive Colin Matthews has admitted that there is no chance of improvement of the status before Christmas. Gatwick Airport, Heathrow Airport and many other airports’ flights have been canceled because of the heavy snow fall.

Airport officials said that the basic problem is that once the runway is cleared, snowfall again covers the whole area and as a result it is impossible for the flights to take off. Heathrow Airport officials reported that one third of the scheduled flights might operate on Tuesday. Gatwick Airport’s officials reported that though it opened on Tuesday, 32 flights have been canceled because of the weather condition. British Airways flight status might improve after Christmas but for now all the festive plans of the travelers are tattered. Not only flights, trains have also been canceled across the city. Mary Walsh, the spokesperson of Eurostar train travel stated that due to bad weather, the authorities are not able to operate the scheduled trains.

Head of the airports authority BAA, Colin Matthews, asked apology from all the passengers and said that he has “underestimated” the difficulties as he thought many flights would be able to take off but in reality he failed to meet the expectation of the passengers. Philip Hammond, the Transport Secretary said that owing to the bad weather status, the passengers might not reach their destination this week. The local media reported that near about six hundred flights of British Airways are expected to fly from some of the local airports and around 100,000 passengers are likely to travel in the flights.

Prince William and Kate Middleton to marry next April

LONDON - Britain's Prince William and his fiancee Kate Middleton are to be married April 29 at Westm...

After 48 years, separated siblings bump into each other by chance!

LONDON - After almost five decades of separation, a brother and sister recently bumped into each oth...

LONDON - A 20-year-old Brit model has given up her glittering career to fight Taliban in Afghanista...

No such thing as stereotypical English gentleman, says Colin Firth

LONDON - Colin Firth has always been viewed as the typical English gentleman with his 'dashing' Br...

I didn't kill her, says husband of slain Indian-origin woman

LONDON - The husband of the Indian-origin woman who was killed while honeymooning in South Africa af...

LONDON - Tens of thousands of foreign students, including those hailing from India, may be barred fr...

LONDON - Detecting cervical cancer in women is set to get quicker, cheaper and more accurate, as sci...

LONDON - The British Government will cap the number of non-EU skilled migrants allowed to enter the ...

LONDON - Hollywood actor Leonardo DiCaprio was among passengers on a plane bound for Moscow that was...
Copyright© 2010 The Gaea Times