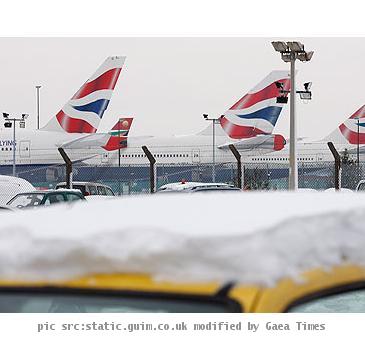 LONDON, UNITED KINGDOM (GaeaTimes.com)- London’s Heathrow Airport remained largely shut on Sunday owing to the unfavorable weather conditions that has been prevailing in United Kingdom for the last few days. The heavy snowfall along with blizzards forced authorities to terminate the flight operation on Sunday with only a limited number of flights landing in London while the departure of flights was completed shut. With Christmas knocking at the door and people getting ready to rejoice in the festive season, it does not come as a surprise that the holiday plans of millions of European passengers has been thrown completely out of gear.

However, there is some good news for air travelers who were left rather disappointed with the shutdown of Heathrow Airport as authorities have declared that on Monday evening, few flights would be allowed to resume their operations for a limited period of time. Meanwhile, officials of Qantas airline have revealed that they expected that bulk of the flights currently stranded at the airport to depart after the weather situation improves to a certain degree later on Monday. Olivia Wirth, a spokesperson of the Qantas airline has revealed to reporters that it would take around 24 hours to clear the backlog of flights from Heathrow Airport.

The spokesperson further went on to say that at the moment as many as 2,000 passengers of the airplane are stranded in Bangkok, Hong Kong as well as in Singapore as those planes failed to make their way to the Heathrow Airport. However, the scenario is likely to get better after the Heathrow Airport reopens later on Monday.

Enraged PCB least interested in Zulqarnain's grievances or taking him back: Sources

LAHORE - The Pakistan Cricket Board (PCB) is neither interested in taking notice of troubled...

'Bush could be arrested abroad over sanctioning 'waterboarding' of terror suspects'

KARACHI - A day after he went missing ahead of Pakistans one-day game against South Africa in Dubai,...

KARACHI - Pakistan wicketkeeper Zulqarnain Haider, who had mysteriously disappeared from Dubai and ...

LONDON, UNITED KINGDOM (GaeaTimes.com)- After failing to accompany his teammates to the Dubai In...