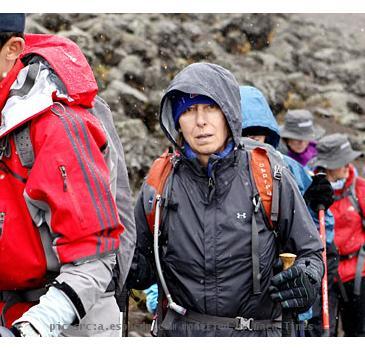 NAIROBI, AFRICA (GaeaTimes.com)- Legendary tennis player Martina Navratilova’s attempt to climb the tallest mountain in Africa namely Mount Kilimanjaro turned out to be partially successful as she had to quit the ride midway owing to health problems. She was admitted to a hospital in Nairobi after recovering from pulmonary edema which was caused by high altitude. The ride was part of a fund raising event. The ace tennis player who won Grand Slam singles tennis for 18 time said in her statement after being released from the hospital “I am feeling much better and really pleased to be going home”. It was on the 4th day of the climb that the 54 year old yesteryear tennis icon was brought down from the highest peak of Africa by the porters.

The medical tests revealed that she was suffering from lung inflammation. Martina Navratilova said that she could not make it to the peak of the tallest Mountain in Africa but the journey was worth the effort. The Tennis legend who has a record of winning Wimbledon champion for 9 times led a team of 27 for raising money for an entity named Laureus Sport for Good Foundation. It sponsors community sports projects globally. 18 members of the team however manged to reach the summit of Kilimanjaro the torrential rain and blizzard notwithstanding.

Martina Navratilova was delighted to know that her team finally made it to the peak of the tallest mountain in Africa even though she could not make it herself. The tennis legend wrote in her dairy that she was forced to climb down because she could not breathe and the doctors advised her to descend.

LONDON - It could have been straight out of a "Star Wars" film or science fiction video game, but is...

LONDON - A Californian couple have been declared the world's tallest man and wife. Guinness Worl...

The Ashes 2010: England's beanpole bowlers have a big advantage

LONDON - Tall bowlers have the best averages, and according to England bowling coach David Saker, S...

LONDON - A Turkish woman, who weighs a little more than a newborn baby and is 28in tall, has expre...

LONDON - Shoppers are all set to go Gaga for new platforms which will be the highest available on th...

PANAJI - Goan freedom fighters are up in arms again. They had once fought against Portuguese rule in...

I was ignorant about Chittagong uprising: Abhishek Bachchan

SHIMLA - After box-office dud "Raavan", Abhishek Bachchan is returning to the big screen as freedom ...
Copyright© 2010 The Gaea Times