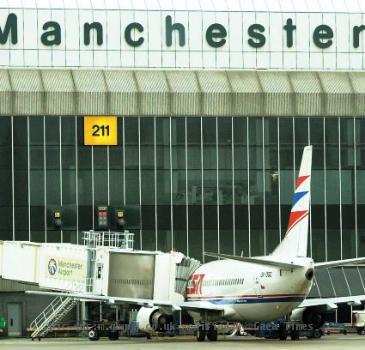 MANCHESTER, UNITED KINGDOM (GaeaTimes.com)- It may sound incredible and shocking to the security experts but the lackadaisical conditions prevailing at UK’s Manchester airport can result in major security breach anytime, as reports have poured in. If the findings are to be believed then the passengers coming from other countries can actually walk out of the airport sans passport check. The UK Border Agency has slammed the airport management for this type of poor security settings prevailing there. The agency’s independent chief inspector John Vine and his team were shocked to find that the international passengers having tickets for connecting flights for other UK locations can bypass security check and reach the street near terminal three.

The Manchester airport has taken note of the security loophole and said that now the loophole is closed. However, the issue was very serious and hence the report has reached the Home Secretary. The agency has also severely criticized the use of the facial recognition gates. The agency team has said that the technology used in facial recognition is unreliable. John Vine said he “was concerned to find that the UKBA had known about a potential risk to the border for some time”. The inspection of the airport took place in May.

There is no evidence that any passenger used this security breach to his or her advantage but the possibility can not be ruled out either. Manchester airport on its part said that as soon as the flaws were pointed out they were rectified and now the security setup is without any such drawback.

LONDON - A study has suggested that Internet chatrooms and social networking sites are to be blamed ...

Pakistani women will love me in 'West is West': Ila Arun

PANAJI - Pakistani women will love her in "West is West" because she represents them in the film, ac...

LONDON - An expert at University of Reading, UK, is examining the use of nanotechnology to restore s...

Cancer was rare, but it did occur in Ancient Egypt: Scientist

LONDON - In a direct contradiction to a recent Nature article on cancer in Egypt, a Manchester Unite...

LONDON - The jury system might "not survive" if tweeting and the misuse of the Internet by jurors is...

Girls are held back by ladette culture: Cambridge University academic

LONDON - A senior academic from prestigious Cambridge University has stated that young women are so ...

Oxford students say they are worst behaved in Britain

LONDON - It seems like a long, long time when students at Britain's top university bragged about the...
Copyright© 2010 The Gaea Times