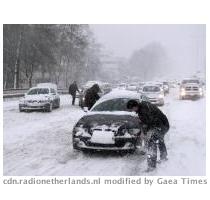 SEATTLE (GaeaTimes.com)- Monday’s heavy snowfall has hit the traffic of Seattle severely. The day saw a heavy shower of snow all over the city, causing a bad traffic in the area.

With winter already here, there is certainly no spare from the hands of the heavy snowfalls. Monday’s snowfall has been regarded as the first chief snowfall for this season. Weather department had already made some predictions, to which nature was seen nodding positively. However, there were reports that the traffic had failed to a great extent as a result of this snow shower. It was nothing but absolute mess. More snow falls are being fore casted with an extreme drop down in temperatures. According to a source, death of two people have been reported from Cowiche, when the car of the two people who were in the same vehicle collided with another as a result of sliding on the snow covered road. News of a bus sliding by in a near by locality, for the same reason was also reported. The National Weather Service has already served a warning notice of a winter storm. Traffic in Seattle is in an extremely hazardous condition right now.

Another source claims that due to the nasty weather, which hit the city’s traffic badly many schools and colleges refused to open up. Some which had already begun, were later on closed down for the day. The weather department has also predicted of a high snowfall for Tuesday, which is likely to steep the roads of Seattle under six deep inches of snow. Monday saw no rest from the snow plowers, who for most of the day kept on cleaning the roads to prevent any kind of accidents.