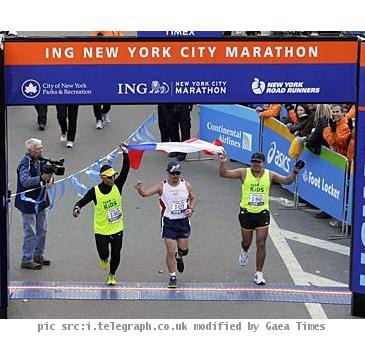 NEW YORK (GaeaTimes.com)- The rescued Chilean Miner Edison Pena proved his point that he “can run” when he made it to the finish line. Previously he said that he wanted to motivate others by joining 43,000 participants in the New York City Marathon 2010. Edison Pena ran and finished in less than six hours and the crowd cheered for him till the end. Later he said that he struggled with himself and his own pain to make it to the “finish” line.

Chilean Miner Edison Pena said that the warmth from American people is “amazing”. He wore dark glasses for the event and sported a knee support for the run owing to his knee injury. The eyewitnesses reported that he was forced to walk in the last section of his run from Manhattan to the finish line. After the marathon Edison Pena said that he cried twice because of his knee injury but he did not give up in the end. Before the event he said that he could have come to New York marathon just to watch it, however, he decided to take part in the event to feel the emotions.

The race director Mary Wittenberg said that the Chilean Miner are going to celebrate him because his courage and will power. New York Road Runners’ Club, which organizes the annual event paid the travel fare of Edison Pena and his wife. Before the event he said that he hopes that the “press” would not “destroy” him if he cannot stand the pain in his knee and gives up in the middle of the marathon. The rescued Chilean miner called this New York City Marathon 2010 as his “incredible dream” as he got support and warmth from the American people.