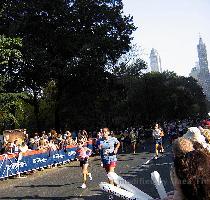 NEW YORK (GaeaTimes.com)- New York City Marathon 2010 is all set to start today. This will be the 40th annual event of the marathon, which is regarded as one of the best and the most popular road races in the world. The event has a social significance as it supports the cause of character development in children living in under-served communities and many other issues related to health and fitness. More than 50,000 children from about 250 community centers and schools are reportedly benefited from the fund collected out of this event.

More than 700,000 participants have gathered from different nations and communities to participate in the New York City Marathon 2010 and achieve the prize money of $600,000, after running a tiring 26.2 miles. The course of the race has remained unaltered ever since it first started. The race starts from Staten Island and ends at the Central Point in Manhattan. In between, it covers Brooklyn, Queens and the Bronx. The route is typically north bound, but takes a sudden left turn at the Major Deegan Expressway. After a meandering path it goes back to Fifth Avenue in the south. More than 2 million spectators will be there to cheer the runners with another 315 million viewers on television. Around thousand volunteers have been appointed who would be checking race numbers along the course. They would also be offering beverages like Poland Spring Brand 100% Natural Spring Water and Pro Endurance Formula sports drink, which are the official beverage partners of the event.

The wheel chair race will start at 8:30 AM, the Lead Women Race at 9:10 AM, the Lead Men and Wave 1 Race at 9:40 AM, the Wave 2 at 10:10 AM and the Wave 3 at 10:40 AM, according to the official schedule. Yellow kilometer signs and clocks has been posted in every 5 kilometers, for the benefit of the runners of New York City Marathon 2010. The event will be aired live on Universal Sports and special highlights would be shown on NBC and NBC4.