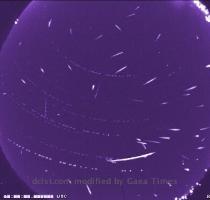 WASHINGTON DC, (GaeaTimes.com)- Orionids Meteor Shower was at its peak yesterday. It will however be less frequent tonight. The experts also say that the sky watchers might have to face a little bit of problems, as it is full moon today and the shower will also be less than yesterday.

The best way to watch the Orionids Meteor Shower tonight, will be to lie down straight under the clear sky, away from the cities, and keep gazing at the sky continuously till his eyes gets adapted to the darkness and the overall layout of the sky. Once he gets used to it, he can frequently see fainted sparks of the meteors diving into the horizon and fading away. Where yesterday, the frequency was 30 meteors in an hour, it would be less today, say the experts. Yesterday, the sky was quite illuminated with the bright radiance of the moon, and therefor only a few few out of 30 showers could be visible. Today it would be even tougher, considering it is full moon. The best time to experience the Orionids Meteor Shower tonight would be in the midnight, from 11 p.m. Although, the time may vary from place to place in the United States. The shower should continue till 3 a.m, when the constellations will be closer to the zenith, before the verge of Sunrise.

Orionids Meteor, appear to come from Orion Constellations and they are associated with Halley’s Comet. Orionids Meteor Shower moves at the speed of 147,300 mph. Therefore, they do not last for too long. All those who will be watching it tonight, must be extremely careful and reflexive while watching the meteors. These annual meteors mostly appear to be at a distance of 68 miles from the ground, and completely burns away before reaching 60 miles.