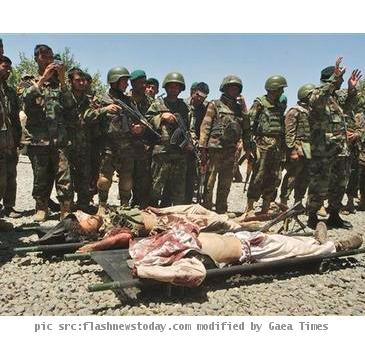 MALUROO - Two of the three terrorists have reportedly been killed during an encounter with police and army personnel in the Maluroo area located on the outskirts of Srinagar.

A television report said Thursday that the militants were killed in an encounter that has so far lasted over eight hours, and is still on.

The report further said that a joint combing operation is continuing with the aim of snaring the third militant. All of them are said to be members of the Jaish-e-Mohammad militant outfit.

Earlier in the day, police and troops of the 2 Rashtriya Rifles cordoned off the Maluroo locality, 15 kms from Srinagar, in the wee hours following a tip off about the presence of at least three militants in one of the houses in the area.

The ultras opened fire on the security forces when they were zeroing in on the target house, belonging to a property dealer Abdul Rashid Bhat. The troops retaliated following which a gun battle ensued.

The militants also hurled hand grenades, one of which injured a cameraperson of the Asian News International multi-media news agency.

As the house was located in a populated area, the security forces had stopped the hostilities in between and sent a group of locals to persuade the militants to surrender. However, the ultras refused to accept the offer and the gun battle resumed.

Civilians were evacuated from the locality before the encounter was launched.A defence spokesman confirmed the use of choppers. (ANI)