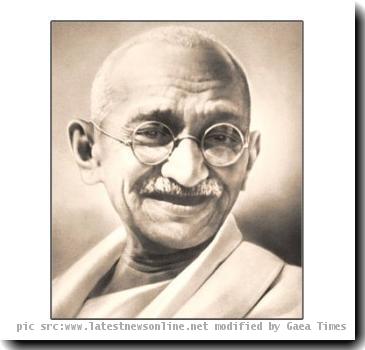 NEW DELHI, INDIA (GaeaTimes.com)- The 141nd birth anniversary of Mahatma Gandhi is being celebrated all across the nation today. Political leaders hailing from different parties paid their homage to the ‘Father of the Nation’ at his memorial in Raj Ghat earlier on Saturday. Some of the prominent leaders who visited Raj Ghat to pay floral tributes on the occasion of Gandhi Jayanti were Prime Minister Dr. Manmohan Singh, Congress leader and UPA chairperson Sonia Gandhi, BJP leader L.K. Advani as well as a host of other personalities across political circles.

On the occasion of Gandhi Jayanti, the memorial of Mahatma Gandhi was decorated with flowers while devotional songs were being sang by large number of school children who were also present at Raj Ghat on Saturday morning to offer their tributes to the ‘Father of the Nation’. The birth anniversary of Mahatma Gandhi, who is known to have played a pivotal role in the Indian freedom struggle, is celebrated every year on October 2 all across the country. Given the fact that Mahatma, who is fondly referred to as ‘Bapu,’ was a strong believer in ‘Satyagraha’ and ‘Ahimsa (non-violence),’ the principles that he unrelentingly preached all his life, his birth anniversary is also celebrated as the International Day of Non-violence all around the globe.

Meanwhile, on the eve of the occasion of Gandhi Jayanti, President Pratibha Patil addressed the nation through a message in which she reiterated that even after so many years, Mahatma Gandhi still inspires people across divide to unite for the cause of independence as well as freedom.