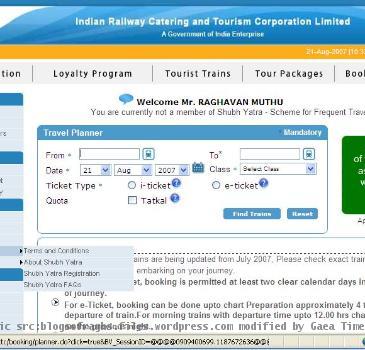 NEW DELHI, INDIA (GaeaTimes.com)- The Indian Railways is far from happy with the feedback it is getting from the passengers regarding the quality of food served by IRCTC. Be it in the superfast trains like Duronto Express or at the railway stalls at big stations, the quality of the food supplied by the entity has come under scanner. That explains why the railways are slowly phasing out IRCTC from most of its popular and high priority trains. The railway Board chairman Vivek Sahai said that the number of complaints from passengers on quality of foods supplied on trains is on the rise.

Even though IRCTC is responsible for the food, the passengers held the Railway responsible for the fiasco. The Indian Railways has announced a new catering policy which will shift the responsibility of supplying foods at major railway stations and in trains to other agencies. Of course the phase out will take some time. The number of complaints against IRCTC rose particularly during 2009-2010. The zonal railways will now monitor the quality of food served on trains.

The change of food policy comes as a boon for those passengers who have become tired of eating stale or average quality food on premium trains even after paying hefty charges for the same. A number of passengers of such trains think the shifting of the food supply from IRCTC to other agencies will change the scenario. Union Railway minister Mamata Banerjee has made it clear that the quality of food served in trains should not be compromised and the railway is trying to see that it is implemented.