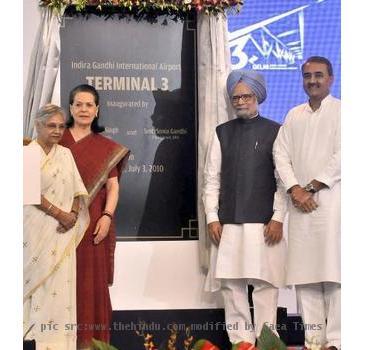 NEW DELHI, INDIA (GaeaTimes.com)- The Indira Gandhi International Airport in New Delhi has got a swanky new terminal. It will help the airport authorities in blending the domestic and international operations and after the addition the airport can deal with 34 million passengers a year. The new terminal named T3 is reportedly the world’s sixth largest terminal. It was inaugurated by Manmohan Singh, the PM of India. He said while inaugurating the terminal that Indian aviation sector is poised for tremendous growth in the next few years. Apart from the prime minister other eminent personalities like Sonia Gandhi, the UPA Chairperson, Praful Patel, the Civil Aviation Minister and Sheila Dikshit the Delhi Chief Minister were present at the inauguration ceremony of the new terminal.

The new terminal at Indira Gandhi International Airport in New Delhi is 4 km long. To offer added benefits to the passengers the terminal has shower rooms, lounges, fast food outlets, restaurants, cafes etc. The PM stressed on the need of upgrading the existing major airport terminals of the country on public-private partnership model. He also said that along with offering customer facilities the airport terminals in the country should always adhere to high levels of safety. The T3 has a huge multi-level car park that is air-conditioned and can accommodate more than 4000 cars.